Here you can read more about the most fascinating species on the planet: sperm whales! Learn more about what they look like, how they live, what they eat and why they are the most amazing whales of them all! You can also read about sperm whale migrations and what is known about their strandings.

Sperm whales (Physeter macrocephalus) are record holders. For example, they are the largest animals on the planet that have teeth. The only animals that are larger are other whales, but they all have baleens instead of teeth. Sperm whales have the biggest brain of all animals, and they produce the loudest sound ever recorded in the animal kingdom. Sperm whales are also among the deepest diving animals, although they share this title with some other whales. They can dive to depths of more than 2000 meters, into a world of complete darkness and immense pressure. Their longs collapse (in a controlled way) during their descent, in order to deal with this pressure. 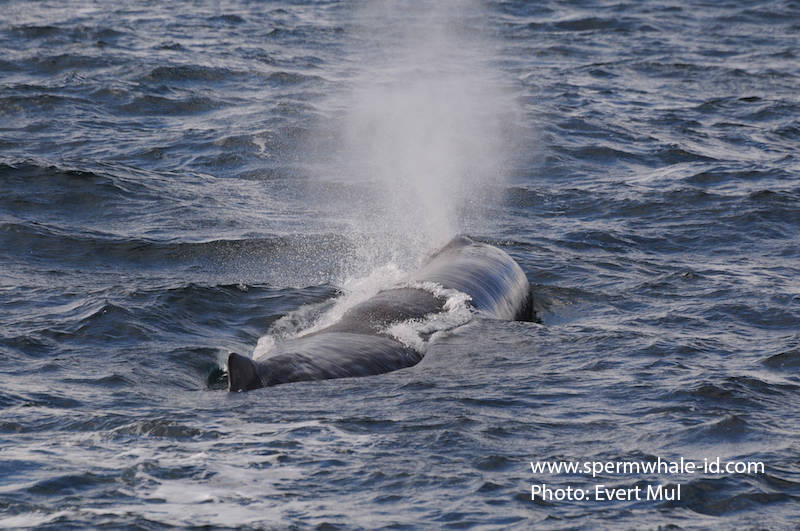 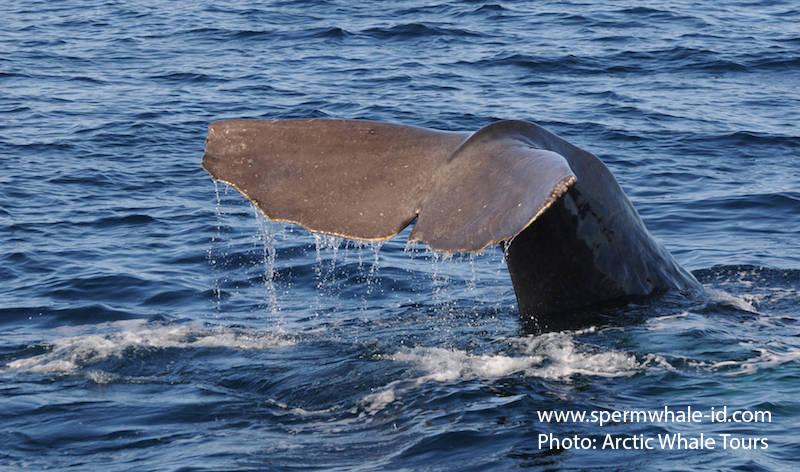 Just like dolphins they use echolocation to find their prey in the darkness. The problem is that their diet consists mostly of squid (including occasionally the illusive giant squid, which can leave scars on the skin of sperm whales). Squid is mostly made of soft tissue which is difficult to distinguish from water with echolocation. That is one reason why the echolocation of sperm whales has to be very loud. In general, squid is thought to be much faster than a sperm whale, so although we know how sperm whales can find the squid (echolocation), we don't know how they actually manage to catch them. In any case, the fact that sperm whales hunt on individual prey, arguably makes them the largest predators on the planet.

Males can be up to 20 meters long, although there are some claims of sperm whales measuring up to 24 meters. Females are a lot smaller, up to 13 or 14 meters. Males can also be more than three times heavier than the females, and weigh as much as 50.000 kg!

Size is not the only difference between male and female sperm wales; females generally stay in relatively warm waters, which means that in Europe, female sperm whales are usually not found north of Portugal. The males on the other hand travel further towards the poles as they grow older. In the northeast Atlantic, sperm whales can be found as far north as 80° (around Svalbard)! In fact, one of the best places in the world to see sperm whales is off the coast of Andøya, Northern Norway (69° North), where you will only find large, adult males. Nobody knows exactly why adult males travel so far away from the females, perhaps it has something to do with food, even though the females are perfectly capable of finding food without having to travel all the way to Northern Norway. Whatever the reason, male sperm whales have to migrate over long distances in order to reproduce. It was long believed that this was an annual event, and that sperm whales would feed in the far north during the summer, and travel southwards during the winter. However, male sperm whales can be found in Northern Norway throughout the year, and some sperm whales have been seen in Northern Norway for several years, without disappearing once (at least no longer than one or two months at a time). The migration of the males is therefore still a great mystery.

The video shows what we know about sperm whale migration and sperm whale strandings in the North Sea.

The North sea is not a good habitat for sperm whales. There is virtually no food for them in such a shallow sea, and the soft sediment makes it difficult for them to use their echolocation for navigating. If sperm whales enter the North Sea from the North, during their southward migration, the only way out for them is through the Channel, between Calais and Dover. Because of all the human activity in the Channel, this is not a very appealing option, and as a result, the North Sea is essentially a trap for sperm whales. Sperm whale strandings in Euope are recorded almost every year, and occasionally a large group of young males dies at the same time on beaches of the UK, Germany, The Netherlands or Danmark. In the beginning of 2016, 29 sperm whales stranded on beaches around the North Sea. Although people sometimes try to push or drag the stranded animal back to sea, usually the animal will still die. This can be either because the animal had a particular (health-related) reason to strand in the first place, or the animal has suffered internal organ damage because of the sheer weight while laying on the beach. When a sperm whale died, the teeth have to be removed by the local government, because they are quite valuable on the black market, and highly illegal (similar to ivory from elephants). Another valuable item that may be found in a stranded sperm whale is ambergris, which is a substance that looks like a soft rock, or maybe like the wax of a candle. This material is extremely valuable because it is very good at absorbing smell. For that reason it can be used in parfume, and even today, parfum manufacturers are willing to pay a handsome fee for a piece of ambergris. Sperm whales make ambergris in their stomach, to protect the stomach against sharp objects, such as the beaks of squid. Sometimes, a block of ambergris can grow so large that it can obstruct the intestines of a sperm whale. If it does not manage to poo the block out, the whale could die.

Research on sperm whales ranges from animal physiology to population dynamics. This website is specifically focussed on photo identification, even though I mostly work with other techniques in my daily work as a whale biologist. Surprisingly enough, there is often not much funding for whale research, and most of the research is done by volunteers. Photo identification is a good example of a research method where volunteers play a vital role. All sperm whales, and many other marine mammals, have distinctive features that you can use to tell them apart. These features include scars, colour patterns, nicks, deformities etc., which can be found on any part of the body. When it comes to photo identification, you want to focus on a part of the body that is observed and photographed relatively often. For example, very few people ever manage to photograph the belly of a sperm whale, therefore it makes little sense to focus on that area when you want to compare as many pictures as possible. Some whales, such as the sperm whale and the humpback whale have the tendency to show their fluke (tail) when they go for a deeper dive. This is a magnificent sight, and it is often captured in photographs. Luckily, the fluke of these animals are particularly suited for identification, since they often contain many scars (sperm whales) or distinctive colour patterns (humpback whales), or a combination of both. Not all whales show their flukes, or some animals have flukes that are less suitable for photo identification. For example dolphins (yes, they are whales too) are often recognisable by their dorsal fin (the fin on their back), while other whales (such as blue whales) are recognised by scars and colour patterns on their back. However, both dorsal fin and back photo identification is complicated by the fact that the animal has a left and right side, which are different. For fluke photo identification most people use the under (ventral) side, but usually both sides of the fluke can be photographed without too much problem. 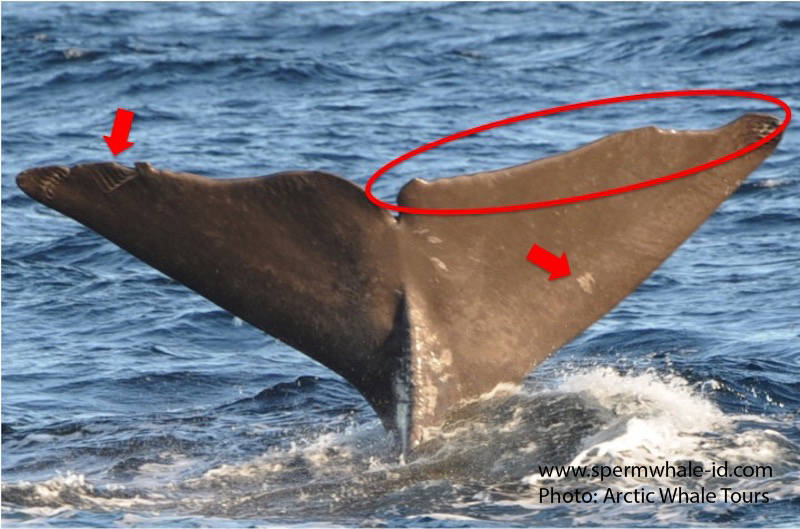 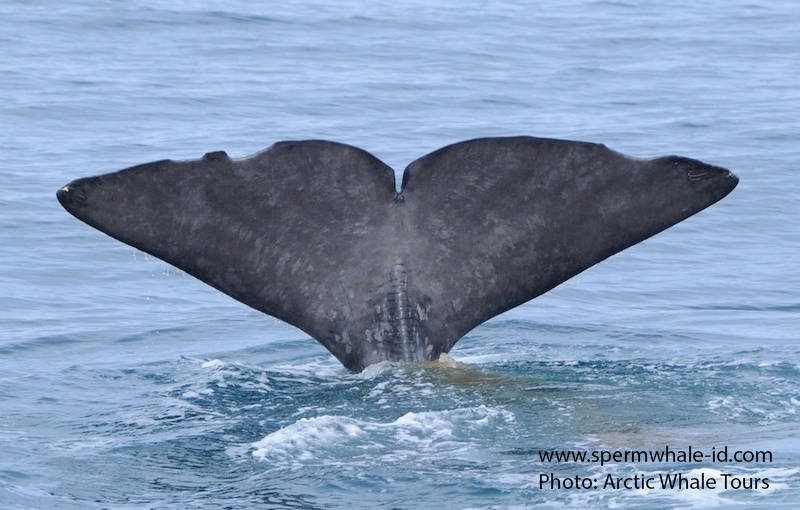 One of the most common questions I get when I explain what I am working on is why do I not put satellite tags on sperm whales to see where they are going. As you can read in the next section, this is exactly what I am doing with humpback whales and killer whales in my daily job. These tags can record for up to several months, which could theoretically be sufficient to follow a male sperm whale between northern Norway and the Azores (one of the nearest places where females can be found). However, these tags are extremely expensive, and difficult to attach to a large adult male. In addition, the tag has to be able to endure enormous pressure during the deep dives of the sperm whales. The main problem, however, is that we have no idea when these animals start their migration. There is a strong risk of tagging an animal that only stays in the same area for months at a time, not revealing anything about their migrations. Photo identification forms a much less expensive alternative which could potentially yield similar results. There are many other types of research that can be used to study sperm whales, including acoustic research, observation behaviour studies, simulation studies (for example to study the energy budget of whales), and abundance estimation surveys. Whenever a sperm whale strands in the Netherlands or Germany, the stomach content is studied, to determine what the animal has been feeding on prior to its death. In other countries (for example in Norway) this is not always the case.
HOME CATALOGUE ABOUT ME CONTACT

© Copyright 2018 Evert Mul - All Rights Reserved - Please do not use any of the images or text on this site without my consent.